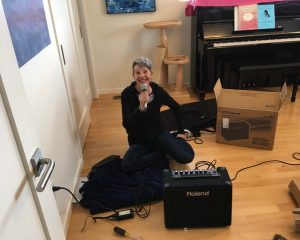 Vinnie Hansen fled the howling winds of South Dakota and headed for the California coast the day after high school graduation.

A two-time Claymore Award finalist, she’s the author of the Carol Sabala mystery series, the novel Lostart Street, and over forty short works.

She claims to be still sane(ish) after 27 years of teaching high school English, despite the evidence of her tickling the ivories with ukulele bands. Vinnie lives in Santa Cruz with her husband and the requisite cat.

ONE GUN – After the Russos interrupt a burglary, they race to find the thief’s tossed handgun before his 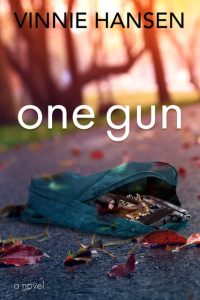 cohorts do; when two tweeners find it first, the characters find themselves on a collision course with tragic consequences.

What brought you to writing? I’m tacking “One Gun” on to this question.

One Gun has its roots in two real events. The first was the burglary of our house. The day before Thanksgiving, my husband and I came home from grocery shopping to find a thief leaving our house with a backpack stuffed with our belongings.

As I called 9-1-1, my husband gave chase. The burglar stopped, pulled a gun, aimed it at my husband’s head, and threatened to kill him.

Yet, when the young man continued to flee, my husband resumed his pursuit, thinking, I guess, that the thief couldn’t fire while running. However, he wheeled around with the semi-automatic while frantically dumping the items he’d stolen. 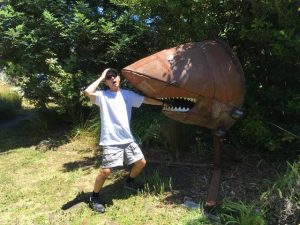 I won’t go into more detail except to say my husband didn’t die, and the burglar was apprehended but after he’d ditched the gun.

Sandy Hook was the second event that contributed to the writing of this book. All shootings are horrible. But as a retired teacher, I’m most deeply disturbed by the massacres at schools. And out of all these, Sandy Hook still distresses me the most. Twenty children were slaughtered. The innocence of the victims makes my stomach shrivel. The courage of the six school employees who died trying to protect them moves me to tears. And then there are the images of the children leaving the school. Terror stamped on their faces. They’ll carry the trauma for a lifetime.

My personal experience followed by this horrific national experience solidified that I wanted to use my writing ability to somehow address gun violence.

Yet, preachiness is a fatal flaw in fiction. I needed a good story. Our burglary wasn’t enough.

But what about the story of the gun used in the burglary? What happened to it? It was never recovered.

Do you base any of your characters on real people? As mentioned above, the burglary of our house was a catalyst for One Gun. A similar scene opens the book, although it serves only as a McGuffin to launch the story of the gun.

In the early drafts, the main characters, Ben and Vivi Russo, bore a remarkable resemblance to my husband and me.

While my husband and I are somewhat interesting people, we make boring characters. As do most “real” people. Real people—like real dialog—are not the stuff of good fiction.*

The biggest changes between the first draft of One Gun and draft 11C were to Ben and Vivi Russo—the two characters people are still bound to equate with my husband and me. However, Ben has gained a background entirely different from my husband’s. He’s no longer Jewish. He grew up in a different city, had a different career, and enjoys a different passion.

aining the distance to treat Vivi and Ben like characters is a huge part of why this novel took so long to write. Struggling to the point of artifice made One Gun a much better book.

*(There are exceptions, like my father, who was, as people say, a character.)

What are you currently working on? I never envisioned One Gun as the start of a series. However, publishers like the idea an author might be good for more than one book, so as soon as I had a complete draft of One Gun, I started a companion novel titled Crime Writer.

The books are connected by place. Both are set in Playa Maria, a fictionalized Santa Cruz (central coast of California). A few minor characters reappear in the second book, and there are a couple of references to the crime that occurred in One Gun. Both titles, though, could be read as a stand-alone.

Unlike One Gun, which has multiple points of view as the reader follows the trail of the gun, Crime Writer has a single protagonist, crime writer Zoey Kozinski. She’s had early success with her books but is currently stuck on the second book for a two-book contract. The story opens with Zoey on a police ride-along which ends up jump starting a lot more than her stalled writing.

I have a complete first draft of Crime Writer. Who knows how many drafts there will be? Perhaps fewer than with One Gun because I don’t have to work through personal issues to get to the story, and it doesn’t have the challenging multiple points of view.

On the other hand, every new piece of writing seems to raise my standards.

The virtual launch for One Gun will be via Bookshop Santa Cruz on Tuesday, June 28th, at 6 p.m. (Pacific Time). You can sign up for the Zoom event on Bookshop’s Events Page. Vinnie will be interviewed by Edgar-nominated author Susan Bickford, past president of the NorCal Chapter of Sisters in Crime.