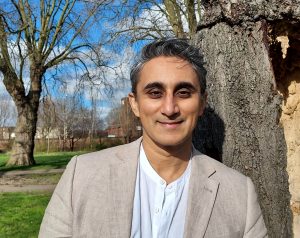 Vaseem Khan is the author of two award-winning crime series set in India. His debut, The Unexpected Inheritance of Inspector Chopra, was a bestseller, translated into 16 languages, and a Sunday Times 40 best crime novels published 2015-2020 pick; the series won a Shamus Award in the US. In 2021, Midnight at Malabar House, the first in the Malabar House novels set in 1950s Bombay, won the Crime Writers Association Historical Dagger, and in 2022 it was shortlisted for the prestigious Theakston’s Old Peculier Crime Novel of the Year award. MW Craven, CWA Gold Dagger winner.

Do you have any advice for new writers? I wrote and submitted my first novel aged 17! It was awful. I spent the next 23 years and seven novels trying to get published before landing a four-book deal for my Baby Ganesh Agency series. Perseverance is important. But more crucially, it’s important to recognise that quality will out – it takes time and effort to bring your writing to the standard that agents and publishers consider publishable. On my website www.vaseemkhan.com you’ll find a blog piece entitled “Is this is a Dagger I see before me – lessons from 30 years of writing”. It might be useful.

What was your debut novel? And what happened next? My debut, The Unexpected Inheritance of 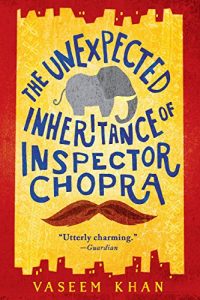 Inspector Chopra, was written after I went to work in India for ten years. It became a Times bestseller after I launched it on the BBC Breakfast sofa to an audience of several million! I then found myself having to write a novel a year. That has meant strict discipline. Luckily, I’m a deadline masochist!

Tell us about your writing process: Wake up. Drown in a few moments of existential angst. Remember that there are still books and cricket in the world, so it can’t be all meaningless. Write for about three hours until my brain stops working. Potter around for the rest of the day, avoiding any DIY assignments my wife would like me to tackle.

What is the most challenging part of your writing process? I’m a detailed plotter – that takes months to get right. My current historical series is compared to Agatha Christie in style – so much so that this year I’m speaking at the International Agatha Christie Festival. The books include complex clues and, sometimes, codes and cyphers, as well as a wealth of historical detail about the period when India became independent after 200 years of British rule. Balancing all these elements is a challenge!

What do you feel are your biggest writing achievements? Getting published after two decades of trying! Followed by winning a Crime Writers Association Historical Dagger, the world’s premier prize for historical crime fiction – for Midnight at Malabar House. In the book, we meet my protagonist, Persis Wadia, newly qualified as India’s first female police Inspector at a time when India is still an intensely patriarchal society. No one knows what to do with her, so they stick her in Bombay’s smallest police station – Malabar House – where all the rejects and undesirables are sent. And then a sensational murder – of an English diplomat – falls into her lap… and she’s off! In fiction, we love pioneers. There’s something mythic about a protagonist challenging the status quo. Persis, as a woman in a male dominated environment, is forced to prove, time and again, that she belongs. As a man, it wasn’t easy to write such a character!

Why do you write about India? I was born and grew up in England but lived in India for a decade in my twenties. It was an intense culture shock. In The Unexpected Inheritance of Inspector Chopra, there is a chapter that takes place in a slum in Mumbai. I visited that slum while living in India, and it was eye-opening to observe poverty on a scale we simply can’t imagine in the West. At the same time, it was life-affirming to see the locals just getting on with things – especially the ever-grinning kids!

How do you come up with character names? A great character name is euphonious, meaning it is pleasing to the ear because it fits the character completely and makes them more real. I trawl through hundreds of online name lists to get just the right name.

We hear of strong-willed characters. Do yours behave or run wild? The Unexpected Inheritance of Inspector Chopra, introduced a middle-aged Mumbai policeman who must solve the murder of a poor local boy – whilst dealing with the odd dilemma of inheriting a baby elephant. What do you do when you live on the fifteenth floor of a tower block, and someone sends you an elephant? Read the book to find out! That elephant has become incredibly popular with readers around the world, so much so that I continue to get email about him. To be clear: he doesn’t talk or fly or solve the mysteries. The elephant is merely a symbol for India and allows me to showcase a different side of Chopra’s personality – he’s a very rigid and honest man. He has to gradually come to terms with the idea that he is responsible for this animal’s welfare.

What’s the most challenging thing about writing characters from the opposite sex? I wrote a female lead for the Malabar House series because I wanted to say something about the patriarchal, sometimes misogynistic society that was India in the 1950s. Persis is ambitious, so much so that she is sometimes quite ruthless in her desire to prove herself. And why shouldn’t she be? We allow male mavericks in crime fiction, so why not a female?

Do you have subplots? If so, how do you weave them into the novel’s arc? Always! For instance, in 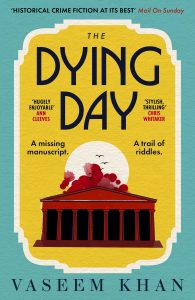 The Dying Day, the second book in the Malabar House series, we see twin plots. A 600-year-old copy of Dante’s The Divine Comedy vanishes from Bombay’s Asiatic Society, and the case lands on Inspector Persis Wadia’s desk. Uncovering a series of complex riddles written in verse, Persis – together with English forensic scientist Archie Blackfinch – is soon on the trail. But then they discover the first body.In a subplot, Persis must also investigate the murder of a beautiful white woman whose body is found on train tracks. Could the two cases be related? The trick is to plan in advance exactly how your subplots fit together. If they don’t hang together at all, I think it can sometimes lead to readers feeling cheated! .. Oh, and to date, only one person – an Australian reader – has claimed to have solved all the riddles in The Dying Day. The challenge is made!

Do you base any of your characters on real people? A lot! Early on in Midnight at Malabar House, Persis finds herself working with Archie Blackfinch, an English forensic scientist based in Bombay. They get off to a rocky start, but we know this is going to be one of those will-they-wont-they situations. And this presents a challenge for Persis. Because, of course, this is India just after Independence. The idea of an Indian woman in a relationship with a white Englishman… They’re both socially awkward people – but whereas Archie is one of those Englishmen who’d rather hack their own arm off than speak out of turn, Persis’s determination to succeed sometimes means that she’s a bit ruthless, such as when she almost shoots Archie’s ear off. I guess you could say there’s a lot of me in Archie. (Though my wife hasn’t shot my ear off. Yet.) 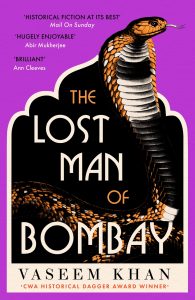 Looking to the future, what’s in store for you? I’m getting ready to promote THE LOST MAN OF BOMBAY, the third book in my Malabar House series, out in August in the UK and Kindle in US on August 18, 2022, hardcover on November 22, 2022, in the US. Frankly, I’d buy it just for the amazing cobra on the cover! It’s set in 1950 in Bombay, India. In this one, a white man is found frozen to death in a cave in the Himalayan foothills. His face is crushed, making his identity a complete mystery. When the case lands on Persis’ desk, she discovers a notebook on the body holding a series of cryptic clues. As Persis and Archie Blackfinch chase down the clues, more murders occur in Bombay of Europeans. Could there be a serial killer loose in the city? Pre-orders really help, so don’t be shy!