Our Guest Today is Michael A. Black 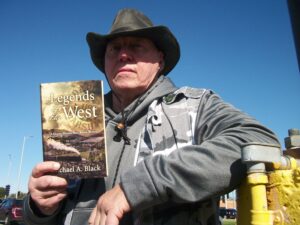 I met Mike through the Public Safety Writers Association. He is always willing and ready to help others, whether it be writing or life in general. Mike has become a friend and mentor. Mike is holding a copy of one my favorite Michael A. Black novels: Legends of the West – A Deputy Marshal Bass Reeves Western.

Genre/genres you write in: It’s always been my goal to be published in as many different genres as I could. So far, I’ve been published in mystery, thriller, western, sci-fi, fantasy, superhero, mainstream, new pulp, sports, historical, and horror. I’m still working on a romance story. 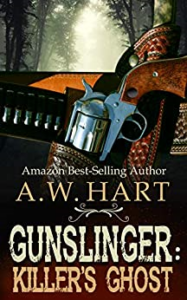 When did you realize you wanted to write novels? I’ve always had an interest in writing. I wrote my first short story in the sixth grade and read it in front of the class. The teacher scrawled D—Poor work across the front of it in red pen and told me never to do it again. Naturally, I didn’t listen to her. I look back on the experience with fondness. I didn’t know it at the time, but it sort of foreshadowed my entire writing career to come: I got my first assignment, my first deadline, and my first rejection all in the space of about three days.

How long did it take you to realize your dream of publication? I struggled for at least ten years trying to get published. In those days, they’d send you a rejection slip with your returned story. I had enough of them to paper the wall in every room in my house. One day I got another story back in one of my self-addressed-stamped-envelopes and noticed the one editor had scrawled something along the seal: Close, but no cigar. Too long. Try again. I was ecstatic. I’d finally gotten some actual feedback for an editor. I promptly rewrote the story and submitted it to another magazine, and it turned out to be my first published story.

Are you traditionally published, indie published, or a hybrid author? All of my stuff has been traditionally published. However, I started out in small press magazines. The market was a bit different back then. They didn’t pay a lot, sometimes only with contributor’s copies, but it gave me a place to learn. As Elmore Leonard once said about the old pulps: “They gave you a place to be bad.” I’ve been published by small press, big press, and a lot of them in between. To me, it makes little difference. I’m just as proud as of my stories that have appeared in those small press mags as I am the big houses. Although the money is nice, I always try to be professional and give my writing the best effort each time out, regardless of the size of the publisher.

Where do you write? I like to write at the kitchen table on the laptop. Once I’m into my zone, I don’t have to worry about anybody bothering me except one of my cats. I’m very leery about writing outside of my home because of my concern about being vulnerable. Some people say they like to write at a restaurant or coffee shop. For me, this would be virtually impossible due to me constantly watching my surroundings.

Is silence golden, or do you need music to write by? I’ve tried listening to music, and it usually distracts me more then it helps. Normally, I don’t listen to any music and try to remain free of distractions.

How much of your plots and characters are drawn from real life? From your life in particular? Being a military vet who served overseas and having been a police officer for thirty some years after that, I’ve had a ton of experiences to draw upon. I’m hesitant to use very many of them because so many involved victims of crimes. I’d never want a victim or a victim’s family to read something I’d written and think that I was capitalizing on their suffering, so I always mask these experiences heavily. Mostly it’s about what the characters experience, and I use the emotions and feelings that I experienced in my writing. I know what it feels like to experience danger, injury, be stabbed, have a bullet whiz by my head, etc. And I know what it feels like to be scared, and I know what it feels like to be lucky. As Winston Churchill once said, “The most exhilarating feeling in the world is to be shot at without result.”

Describe your process for naming your characters? Names are a double-edged sword for me. I tend to repeat them often. The name Jim turns up in my writing a lot for some unknown reason. I keep a character log listing each name I used when I’m writing a book. It’s one way of keeping them straight.

Real settings or fictional towns? I use both and often use fictional settings within real cities. I try to keep things realistic if it’s set in an actual location. I think a bit of artistic license and discretion is a good idea in regards to setting. It’s never good practice to portray a real place in your book in a negative way.

What’s the quirkiest quirk one of your characters has? I’ve had a lot of characters with quirks, so this is a hard one to answer. Writing the Executioner series (as Don Pendleton), I have to come up with James Bond-type villains who are larger than life. I usually try to put a dose of kink into some of the villains, but it’s also important to give the bad guys one of two good aspects, so they don’t come off as cardboard. An agent once advised me to give one of my villains a severe dental problem or a pet dog to which he was fiercely loyal. So I did the next best thing and gave him a phobia about tooth decay and had him brushing his dog’s teeth religiously. Since no good deed goes unpunished, I had the dog subsequently urinate on the guy’s rug.

If you could have written any book (one that someone else has already written,) which one would it be? Why? This is a tough one. I’d have to pick one of the books that I was forced to read in school, perhaps The Scarlet Letter or Moby Dick … maybe one of Faulkner’s such as Light in August. I’d choose any one of the above, so I could cut all of the excess out of them and make sure they had satisfying endings.

Everyone, at some point, wishes for a do-over. What’s yours? I haven’t thought about it much. There are no do-overs, only regrets. But that’s why life is bittersweet.

You’re stranded on a deserted island. What are your three must-haves? Food, water, and a quick way to get back to civilization.

What was the worst job you’ve ever held? I’ve had quite a few, but I’d have to say pulling KP in the army was one. Well, maybe latrine duty … But these gave me the incentive to apply myself to become a squad leader, so I didn’t have to pull those anymore. When I was 19, I had to drive a truck around the South Side of Chicago delivering tires to gas stations. That was pretty bad.

What’s the best book you’ve ever read? Wow, this is a tough one. There have been so many. I suppose the best one is Deliverance, by James Dickey. He was a nationally recognized poet in the 1960s. He spent ten years writing a first-person thriller about four city dwellers who go on a canoe trip into the mountains of Georgia and have a horrific experience that changes them forever. It has the best first line of any book I’ve ever read:

It unrolled slowly, forced to show its colors, curling, and snapping back whenever one of us turned loose.

Man, that guy could write. When I finished the novel, I went back and reread that first line and realized he had summed up the entire book with that one sentence.

What’s on the horizon for you? That remains to be seen. Hopefully, more books and short stories to be written. I’m currently working on a new series for Wolfpack publishers about modern day bounty hunters. We’re calling it the Trackdown series. The first one is due on in October, and it’s called Trackdown: Devil’s Dance.

Anything else you’d like to tell us about yourself and/or your books? My books are meant to be entertaining. I always try to write the kind of book I’d like to read, and this is essential because, as any writer knows, you have to read your own book several times before you turn it in.

Contact Information, Website, and/or blog links: Right now, my website is out of commission. I have an Amazon Author’s Page as well as author pages on Crossroad Press and Wolfpack Press. Anybody wanting to chat, my email is DocAtlas108@aol.com.